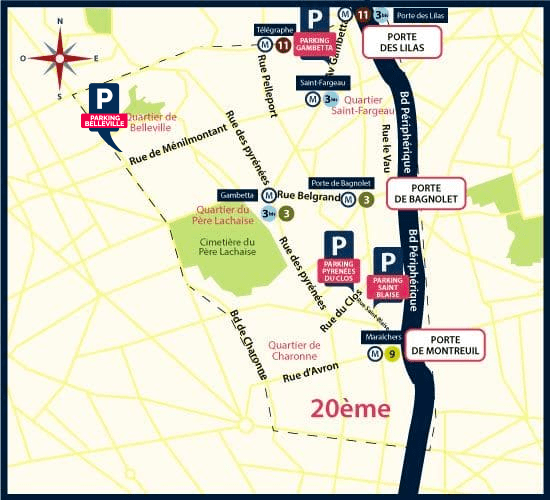 The 20th arrondissement is known as the home of the famous Père Lachaise cemetery.

Many people travel to the area each day to work in the numerous offices and shops in the 20th arrondissement, which also further stretches demand for a limited number of parking spaces.

It is also important to remember that the city council's recent policy, introduced to reduce congestion on the city's streets, has resulted in improved public transport provision but a substantial reduction in the provision of on-street parking in Paris.

The 20th arrondissement has undergone substantial road redevelopment work, including the creation of tram lanes and the introduction of new Vélib' and Autolib' stations. This has inevitably led to a dramatic reduction in available on-street parking spaces in the area.

Parking your vehicle in an hourly or monthly public car park is now the only viable alternative, avoids the risk of incurring fines or having your vehicle towed away, and helps to alleviate potential stress.

These recently renovated, patrolled car parks are monitored and accessible 24/7.
They offer rates with or without long-term commitments, with hourly, monthly and annual options available for all vehicle types.

Detailed information about parking in Paris' 20th arrondissement. Are you looking to book a space near Hôpital Robert Debré, Hôpital Tenon or Hôpital de la Croix Saint-Simon? If you need to get to Maussins-Nollet Clinic, Père Lachaise cemetery or Montmartre, we have cheap car parks to suit you in Paris.