To reach Opéra from this car park, take metro line 9 at Maraîchers towards Pont de Sèvres and get off at Chaussée d'Antin (La Fayette).

Location of the car park

Located in north-east Paris, the Place des Fêtes car park, formerly Azur Autos, is in the 19th arrondissement of Paris. It can be accessed from Rue de Belleville, Place des Fêtes or the Boulevard Périphérique (Porte du Pré Saint Gervais or Porte des Lilas).
Operated by our subsidiary Parking Paris Nord, this fully renovated car park has a capacity of 630 spaces and is open and guarded 24/7. It is also equipped with a video surveillance system and reinforced lighting.
The Place des Fêtes car park is ideally located for drivers wanting to park in the 19th arrondissement. Its location also provides easy access to destinations such as the Place de la République, the Gare du Nord, the Gare de l'Est, Les Halles, Pigalle etc.

The Place des Fêtes car park thus combines the advantages of a historical district of Paris with proximity to several popular destinations in the capital, such as the Parc des Buttes Chaumont, the Belleville district and the Edith Piaf museum.
With your car parked in total security, you can then choose to use public transport to travel around Paris, as the Place des Fêtes car park is very well served (metro line 11, bus 48 and 60).

The Opéra district is located in central Paris, at the intersection of several major boulevards and avenues. It is home a vast array of company head offices, restaurants, bars, theatres and cinemas, and is close to the Haussmann district with its vast stores. The famous Place de l'Opéra is situated at the end of Avenue de l'Opéra, which runs between the Louvre and the Opéra de Paris. Boulevard des Capucines and Rue Auber also pass through the district, the latter leading to Gare Saint-Lazare, as well as Rue de la Paix and Rue du Quatre-Septembre, which runs directly to Place de la Bourse. Its central metro station is connected via underground passageways to the Auber RER station and, indirectly, to Havre-Caumartin station and its nearby major stores.

The Opéra district is therefore surrounded by museums, shops, luxury stores, businesses, banks and travel agencies. It attracts many Parisians, night owls and tourists on a daily basis. It has a constant stream of car and delivery vehicle traffic. Parking in the district is therefore a real battle, with the few authorised parking spaces available snapped up from early in the morning and the majority of parking spaces in the district reserved for delivery vehicles, buses, taxis and tourist coaches.

A clever parking solution near Opéra

The ideal, least expensive solution is to leave your vehicle at the Pyrénées-du-Clos car park, from where you can go directly to Opéra station by metro (line 9) in under 30 minutes. Choosing this car park will significantly reduce your parking costs. 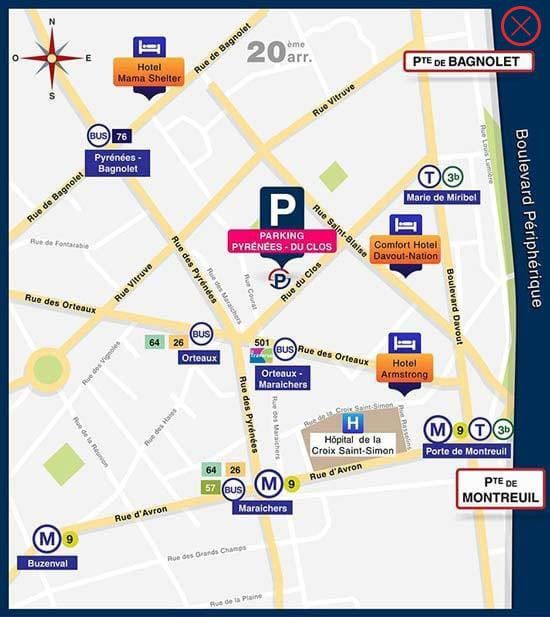 Park close to Paris' tourist attractions with Paris France Parking. We offer a car park close to Opéra Garnier. If you prefer to avoid driving in central Paris, we also have park-and-ride car parks located near metro stations and bus and tram stops. We also operate car parks close to Paris' stadiums: Stade de France and Palais Omnisports de Paris-Bercy.Contact us for more information or to book your space.