Park in Paris Near The Louvre

Location of the car park in Paris near the Louvre

Finding a car park in Paris near the Louvre museum is easier than even before. Located in north-east Paris, the Place des Fêtes car park, formerly Azur Autos, is in the 19th arrondissement of Paris. It can be accessed from Rue de Belleville, Place des Fêtes or the Boulevard Périphérique (Porte du Pré Saint Gervais or Porte des Lilas).
Operated by our subsidiary Parking Paris Nord, this fully renovated car park has a capacity of 630 spaces and is open and guarded 24/7. It is also equipped with a video surveillance system and reinforced lighting.
The Place des Fêtes car park is ideally located for drivers wanting to park in the 19th arrondissement. Its location also provides easy access to destinations such as the Place de la République, the Gare du Nord, the Gare de l'Est, Les Halles, Pigalle etc.

The Place des Fêtes car park thus combines the advantages of a historical district of Paris with proximity to several popular destinations in the capital, such as the Parc des Buttes Chaumont, the Belleville district and the Edith Piaf museum.
With your car parked in total security, you can then choose to use public transport to travel around Paris, as the Place des Fêtes car park is very well served (metro line 11, bus 48 and 60).

The Louvre is often considered one of the world's most prestigious museums, and is one of the most popular attractions in France. That popularity means there is always a need to park in Paris near the Louvre. The museum owes its reputation to its vast collection of works from all four corners of the globe. This former royal palace is located in Paris' 1st arrondissement. In total, it covers an area of more than 2 million square feet, a third of which is exhibition space. With its attractive architectural features and famous works on public display, the museum attracts millions of tourists from every country each year.

The glass pyramid in Cour Napoléon (75001), also known as the Louvre Pyramid, was designed in the 1980s by an American architect. Its construction was ordered by François Mitterrand, who was President of France at the time.

How to park in Paris near the Louvre

The sheer number of visitors to the Louvre district makes it difficult and time-consuming to find a parking space. The surrounding streets, with their attractive buildings and elegant shops, are a haven for tourists. These are certainly not the ideal conditions in which to park. Drivers looking for added peace of mind can use a car park located just half an hour from the museum. 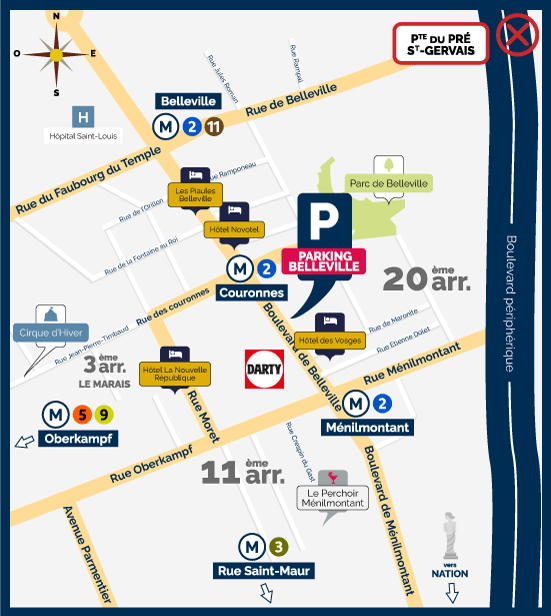